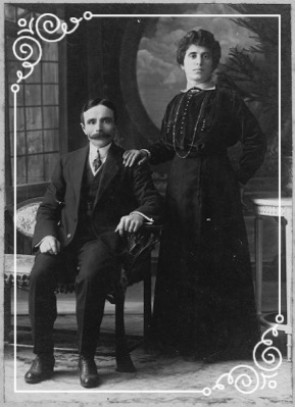 Alfonso Randon with his wife Miriam in 1938,

the only photographic find from the era

Wendy Randon, known as Wemi, was born in Buenos Aires in 1912 to an Italian father and an English mother, both pharmacists, who moved to the Argentinean capital at the end of the nineteenth century to practice their profession in the San Telmo district.  Wendy was drawn to the family business from an early age, experimenting and creating new products with healing and protective properties.

At age 20 she created a fluid, lightweight face cream, which was a remarkable success with the Argentinian nobility and bourgeoisie of the time.

Despite its distance from the European continent, the open city of Buenos Aires was equally affected by the stylistic revolution of the period, in which women played an increasingly role in the social scene, dresses got shorter, and body parts were flaunted like never before. Nourishing and taking care of one's skin became increasingly important, and makeup and almost sculptural hairstyles were a fashion must.

Thanks to word-of-mouth, Wendy's handmade face cream became the worst kept beauty secret for the most fashionable ladies in Buenos Aires.

Given her success in the family laboratory, Alfonso Randon decided that his daughter would benefit from a period of work experience in the old continent, and decided to send Wendy to Venice with her uncle Augusto, also a pharmacist.

It was here that she met Pierre, a French chemist and friend of her uncle, many years her senior, and the two became devoted to one another. Wendy decided to follow him to Paris, and although their story did not last long, at his side she had the opportunity to experience the most exclusive and trendy spots in Paris.

Returning to Buenos Aires at the end of the 1930s, her time in Paris inspired Wendy to establish a specific identity for her creams, and with the help of her father Alfonso and her mother Miriam, she created the brand "Wemi la Maison".

Her talent as a researcher coupled with her strong desire to increase female knowledge of techniques for caring for their bodies, including women belonging to less wealthy social classes, meant that the business soon found success, and distribution became widespread across many of the country's provinces.

Unfortunately, however, on 15 March 1955, her dream came to an end. On the road that connects Buenos Aires to Mendosa, where a new shop was planned, Wendy died in a tragic accident at the age of 43. Her parents, heartbroken over the loss of their beloved daughter, shut themselves away in their mourning. Within a few years, the laboratory had been closed for good, and Wemi la Maison was forgotten.

In the 1970s, her descendants embarked on a real estate operation, and the subsequent clearing of old premises, left abandoned for many years, led to the rediscovery of young Wendy's manuscripts.

Brought to Italy, the documents were kept safe by Maria, daughter of uncle Augusto, for several decades. It was only after her death that one of her grandchildren, driven by a strong interest in the past and a great enthusiasm for the future, recreated the spirit of Wemi la Maison, developing a new line of organic-based products.